The Hunt – the past and future of mystery shopping

In the early OO’s, I worked for a training company in retail. Week after week, I trained shop employees in the basics of guest experience and selling; how to greet customers, how to engage with them, and how to sell stuff. And I was pretty happy with my training program; We watched ‘Cliff’s view on customer service’ (we just switched from VHS to DVD), we had a great program (called: GOAL), we roleplayed and practiced, and I used quite some humour (or, I like to think I did).

Our training company actually consisted of two companies; one for training, and one for mystery shopping. Quite often they would work together. For some clients, let’s say ‘Halfords’ –  a retail chain in car accessories and  bikes, with  stores in every mayor city – we would do  both. Every month I would have a new group of trainees coming from different stores, and every 3 months we would do mysteryshopping in all stores.  After every visit, all shopmanagers would receive a four-page report on how they had scored;

During my trainings I would ask about the mystery reports. Interestingly, most of the time I would get one of these two answers:

In short, mystery shopping results had no significant meaning for those working in the shops. Either way, there was no incentive or reason to change. At best, it was a compliment, otherwise just an unfair and bad timed snapshot, not representative of their normal standards.

The other thing was… the results of my training. Surely it should be so that mysteryshopping results in shops that were trained by me should be higher than in those of shops which had not had my awesome sales training. But that was not the case. In fact, looking at the results there was no reason at all to believe that my training had any impact.

Still hopeful I could inspire the young sales force at Halfords, I put even more energy into my trainings. But at the end of Day 1 of my two-day training sessions I would see my pupils doze off. Somehow, a stuffy conference centre with cardboard ceiling and fluorescent light seemed not to be the optimal environment for learning about selling to real customers on the real shopfloor.

It was on one of those end-of-day-1 nights that I found myself at the hotel-bar, wondering if it wouldn’t be better to stop training at all. And at the same time wondering where my trainees were, because we would meet at the bar for a drink – usually the favourite part of the two-day program. I went up to the third floor of the hotel and found them in of the rooms, where they hooked up a Nintendo 64 tot the hotels bulky TV. (remember, it was 2003). They were taking turns, and if they were not playing, they would watch and cheer for the others. 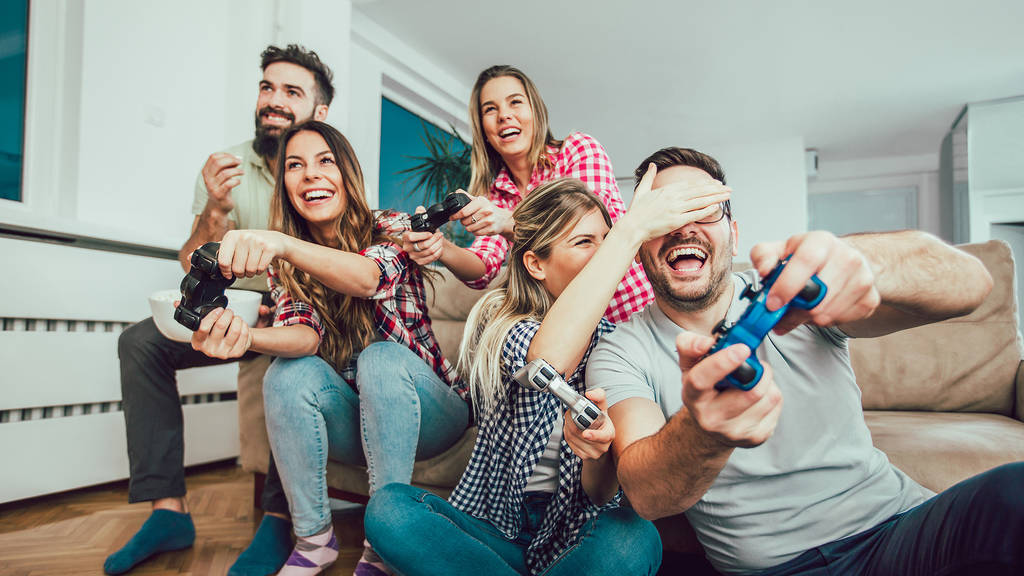 Three days later I went to my boss with a clear but daring message; ‘I am not training those retail salespeople any more’. Both amused and annoyed he asked me if I had an alternative. One that would have value for the client, would be as good as training and would still bring in money for us as a company. I had.

‘Instead, I want to play a game with them, using our mysteryshoppers’.

My plan to let sales employees ‘hunt’ and reveal the ‘mystery man’ by having a great interaction with them (using a specific codeword in their conversation),  was met with hesitation. Nonetheless I was allowed to pitch the idea at Halfords, for a board of area managers, sales managers and the head of training. Two months later, we kicked of The Hunt;

105 store managers were gathered at Halfords Headquarters, where – after the necessary company updates, the houselights went down. On a big screen, a trailer-like video  introduced ‘The Hunt’; a thrilling three-week program with one clear objective: ‘Catch as many mystery men as possible’. In the dying seconds of the clip, just as the houselights faded back on, one of the mobile phones in audience beeped from an incoming text message. Then another, and within seconds about 100 (mostly Nokia) phones went off. After reading ‘The Hunt starts NOW’, managers started to phone their colleagues in the stores… From that moment on, for three weeks the game was on.

Data from mysteryshopper came in almost realtime. Results, stories and reveals where shared on the ‘The Hunt’ page on the companies intranet. (Yes, intranet. It was 2003, and all stores had one computer back of house for their orders). There was a feed-function where branches could share, brag and cooperate with – or mislead – competing storeteams. There were updates and hints from the mysteryshoppers, a leaderboard, photos from employees who caught the mystery man and  a codeword – to be incorporated in your customer conversation – that would change every three days.

The results were astonishing and were backed by hard data. Employees became highly alert. For example, measurement from before The Hunt showed that 48% of people entering the store would be greeted;  during The Hunt that would be 89%. Employees approached more customers, became more creative and social in sales conversation, they had more contact with other stores and in the end… they sold more. By focussing their behaviour on customer interactions for three weeks in a row, within the context of a game – but with real world impact , they trained themselves much better than I could in my two day conference-room-training.

Another hard result was the company’s revenue. Halfords reported a 4,7% increase in turnover  in the weeks of The Hunt (compared to the same weeks the year before).  Converted into hard cash, that would be more than they would spend on training and development of all their employees in a whole year. They were more than happy.

Other great side-effects were related to non-players (nowadays we would call them muggles; ‘normal’ customers visiting the store, not aware of ‘The Hunt’ being played in alternate reality). Shoppers would report a vibrant atmosphere, more attention from the staff, and overall a more pleasant shopping experience.

The players themselves – about a 1000 Halfords employees – were very enthusiastic about the Hunt. From the moment the program ended they were asking for a new episode.

The Hunt became a yearly highlight for Halfords. Since then we played The Hunt for other retailers, supermarkets, banks, and hospitality. Over the years we learned and tweaked the format, and we keep adopting it to new developments (new communication platforms, for example). What remains is the core of The Hunt; impactful learning and results, directly on the workfloor.

In 2003, the term ‘Gamification’ was unknown, just like ‘Game Based Learning’. In hindsight, The Hunt was and ís gamification, As The Hunt is still played today, I am proud of calling it ‘one of the of the longest running gamification project ever.

Is there a future for The Hunt? Oh yes, there is! If you would have asked me 17 years ago ‘Is there a future for classroom-style sales training for retail’, I would definitely say ‘no’. I am baffled by the fact that this type of training is still so widespread, while there are better alternatives. To me, ‘The Hunt’ is surely on of them.